Nigerian footballer “Chelsea” Victor Moses will be leased to “Liverpool”, in one voice say British newspapers. According to The Guardian, clubs have agreed on the financial side.

Footballer cost at exactly one million pounds (1.17 million euros) he will play in the camp of Liverpool this season. Head coach of “Liverpool” Brendan Rodgers has been interested in the Nigerian footballer for a long time, but Chelsea did not want to grow a competitor .

However, after the acquisitions Willian Eto’o Roman Abramovich has become more kind.

It is also possible that “Liverpool” just offered the best price, besides them on the Nigerian football player claimed smaller clubs.

Moses came to the “Chelsea” in the summer of 2012 for 10.5 million euros, but after changing the head coach and appearance of Andre Schürrle and Kevin de Bruyne  in the team he is on the bench.

British journalists also expect that before closing of the transfer window Liverpool will will buy Mamadou Sakho “PSG” and Tiago Ilori “Sporting”.

Holding Red and White, co-owned by Usmanov , has a nearly 30% share of English  Premier League Club”Arsenal”. He has invested invested about 200 million pounds. Due to moderate spending money for English majors “Arsenal” shows good financial results.  Usmanov has offered to invest in the development of the club and expressed his dissatisfaction with the existing policy, but a small proportion of the shares does not allow him to get the “Arsenal” play by their rules.
Achievements: No, the club has not won a trophy in English Premier League Club since 2005.

Businessman, according to media reports, in 2008, purchased land in the prestigious British Sandbanks. The British claim that the villa, worthing 5 million pounds was built for the Russian businessman, by the company owned by Eddy Mitchell – CEO of FC “Bournemouth”, which plays in the third on the power of the English Premier League. In 2011,  Demin  became the football partner of Mitchell. With Demin joining the club, it started to spend on buying players sums, which it had never dreamed about in Bournemouth.
Achievements: led the club to the 2nd league.

Anton’s father Boris Zingarevich – co-owner of a major pulp and paper empire. About the personal capital of Zingarevich Jr. is not known. According to media reports, the 29-year-old Russian has bought “Reading” for 30 million pounds. For the purchase of the players in the season 2012/2013 e spent only 9.5 million pounds.
Achievements: in 2011/2012 season he led the club in the English Premier League, but at the end of the season 2012/2013 “Reading” was again departed from the English elite.

The last year victory of  “Chelsea” in the Champions League was really expensive for Abramovich. According to estimates of The Sun, top of  European football cost nearly two billion pounds  (including 642 mill – for buying players, 1,2 billion – for their salaries). Abramovich returned José Mourinho to the club (since 2003 in “Chelsea” have worked 9 coaches). The Mourinho‘s salary is 8.5 million pounds per year.  By the way, according to Bloomberg, oligarch allocated about 200 million pounds for charity in 3 last years.

The banker from St. Petersburg David Traktovenko sold his shares of  “Zenith FC” to “Gazprom”and  and decided to spend the money on football in the country where his daughter lives. At the moment, the businessman who has $550 million owns 90% of shares of “Sydney”. (The Chairman of “Sydney” Scott Barlow is Traktovenko’s son-in-law). We have not heard about “Sydney’s” profit, but it’s spending amazed the local football.  Alessandro Del Piero’s salary who came to this football club last year is 2 million dollars per year.  This is a record for Australian football.

When FC “Monaco” faced financial difficulties,  Prince Albert II announced the search for “A first-class partner for the successful development of football”. Rybolovlev became this partner. He made his capital in the production of fertilizers and it is estimated at 9.1 billion dollars. According to the contract Russian has 66,7% of the shares, and the rest remaines in the possession of the principality. Under the agreement Rybolovlev has to invest in a football club 100 million dollars  in 4 years. And “Monaco” has already spent 70 million euros his summer for a pair of players from the “Porto“. 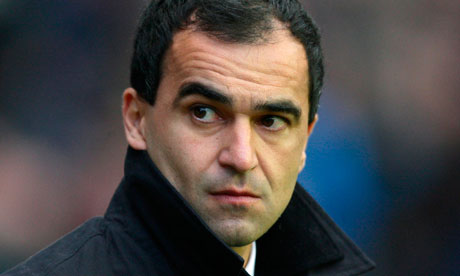 Roberto Martínez has been confirmed as the new manager of Everton. He will be presented to the media at a 4pm news conference having signed a four-year contract at the club.

Martínez, who led Wigan Athletic to the FA Cup last season, but also to relegation from the Premier League, had long been the favourite to succeed David Moyes at Goodison Park with Moyes leaving the club at the end of last season to take over at Manchester United.

An announcement on the appointment had widely been expected since Monday evening when Wigan’s chairman, Dave Whelan, announced that the two clubs had agreed terms on a compensation package, believed to be in the region of £2m.

The 39-year-old Spaniard joined Wigan as manager in 2009 after two years in charge at Swansea City.

He will inherit an Everton team that finished sixth in the Premier League last season. Moyes spent 11 years at Goodison Park and won many admirers for steering Everton to regular top eight finishes, despite not having anything like the finances of the teams around him. The Scot, however, failed to win anything while at Everton.

Martínez emerged as the outright first choice of the chairman Bill Kenwright after he considered a three-man shortlist, believed to also include Porto’s Vitor Pereira and former Schalke coach Ralf Rangnick, over the weekend.

However, Everton’s interest in the Latics manager was registered some time before that when it became clear the Spaniard was considering his position following their relegation from the Premier League.

Everton made an official approach on 24 May and four days later Martínez told Whelan he wanted to leave as he did not feel up to the task of getting the club out of the Championship.

However, despite the negative connotations of taking a team down Martínez enhanced his reputation by winning the FA Cup – something Moyes never achieved in his 11 years at the club – by beating Manchester City at Wembley last month.

The Spaniard is renowned for playing an attractive style of football and working on a relatively stringent budget, both of which appealed to the Goodison hierarchy.

The former Everton striker Kevin Campbell believes Martinez will be “a breath of fresh air” after Moyes’s more pragmatic approach.

“The way he plays the game, the fans are going to like the style, and I think the players are going to improve, and that’s really important,” he said. “Everton have wonderfully gifted players and I think he will give them a new lease of life.”